Outline of the exhibition


Kamimura has been developing his work on the relationship between sight and sound, within the theme of scenery, since2010. In his early work he made acoustic art which conceptually captured landscapes and scenery, and he dismantled and reconstructed language and sounds made in the past, such as onomatopoeia, words that express sounds and states, and the musical scores and tunes of composer Erik Satie.
Following those early steps, his artwork and work ethic could be seen to change along the borders of his sound installation “Night Passage”, which was shown at a solo exhibition at Art Tower Mito right after the 2011 earthquake disaster. He saw
with his own eyes the natural disasters and man-made disasters caused by the earthquake disaster, and felt it was necessary to directly confront the landscape and environment, and so he began using environmental sounds, which were obtained via field recordings, as his main subject matter for his creative work. At an artist residency in Taiwan in 2017 he researched a landscape painting called the “East Taiwan Coastal Road” by Taiwanese painter Chen Cheng-Po, and visited
Orchid Island, an island where an indigenous people, the Tao, live who can be seen in the painting. There, he recorded their traditional songs and also the environmental sounds of the port where nuclear waste is stored, produced “ambient colors, ambient songs”, which saw the combination of red soil, to symbolize Orchid Island, with those sounds. Similarly, he has recorded environmental sounds from around the world, including both Japan and as far afield as Germany, Switzerland, the US, and Taiwan. Amongst the artwork that he has created and exhibited, there has been a steady change in his stance of
conceptually capturing the environment, and a shift to a more perceptive approach.
The environmental sounds collected by Kamimura through recording equipment, such as microphones and field recorders, crosses over a diverse range of sounds, from ones we do not usually hear such as the raging currents of the sea on a spring tide day, to the sounds of our own daily lives, like the noise of the city, and people talking. Kamimura highly regards his field recordings as extremely private listening experiences, which are, along with his memories, something which can’ t be shared with anyone else. However, by making the sounds he has obtained from these activities a part of his work environment, Kamimura is trying to create within the public space of an exhibition a hybrid environment that brings together two points. The private experiences and memories of the artist himself, and phenomena beyond the perception threshold of humans which enclose the world in which we live.
Temporary Ground is his first solo exhibition in four years, and it is one that has examined the environment, something that surrounds us, through the collection and reconstruction of substances and sounds obtained from drift ice. He stayed in of Okhotsk, under a collaborative research project with Hokkaido University’s Communication in Science & Technology Education & Research Program (CoSTEP) from February to March 2019. Drift ice freezes over in faraway Siberia and packs of it drifts down to the shores of northern Hokkaido, and they have declined while continuing to transform due to the influence in recent years of global warming and climate change. Despite this human influence, these cold white chunks transport sea life such as plankton, which are essential for different kinds of life cycles. He captures this world which we all live in as an “environmental circulation that is being formed while it is being artificially influenced”. The drift ice in the Sea of Okhotsk is a material phenomenon that hints at his thoughts. Kamimura has named this existence as Temporary Ground, as it isn’ t a natural object like this drift ice, nor is it an artificial one, and using materials and sounds that encompass drift ice, he tries to express an uncertain, and ambiguous ecology, which surrounds us. 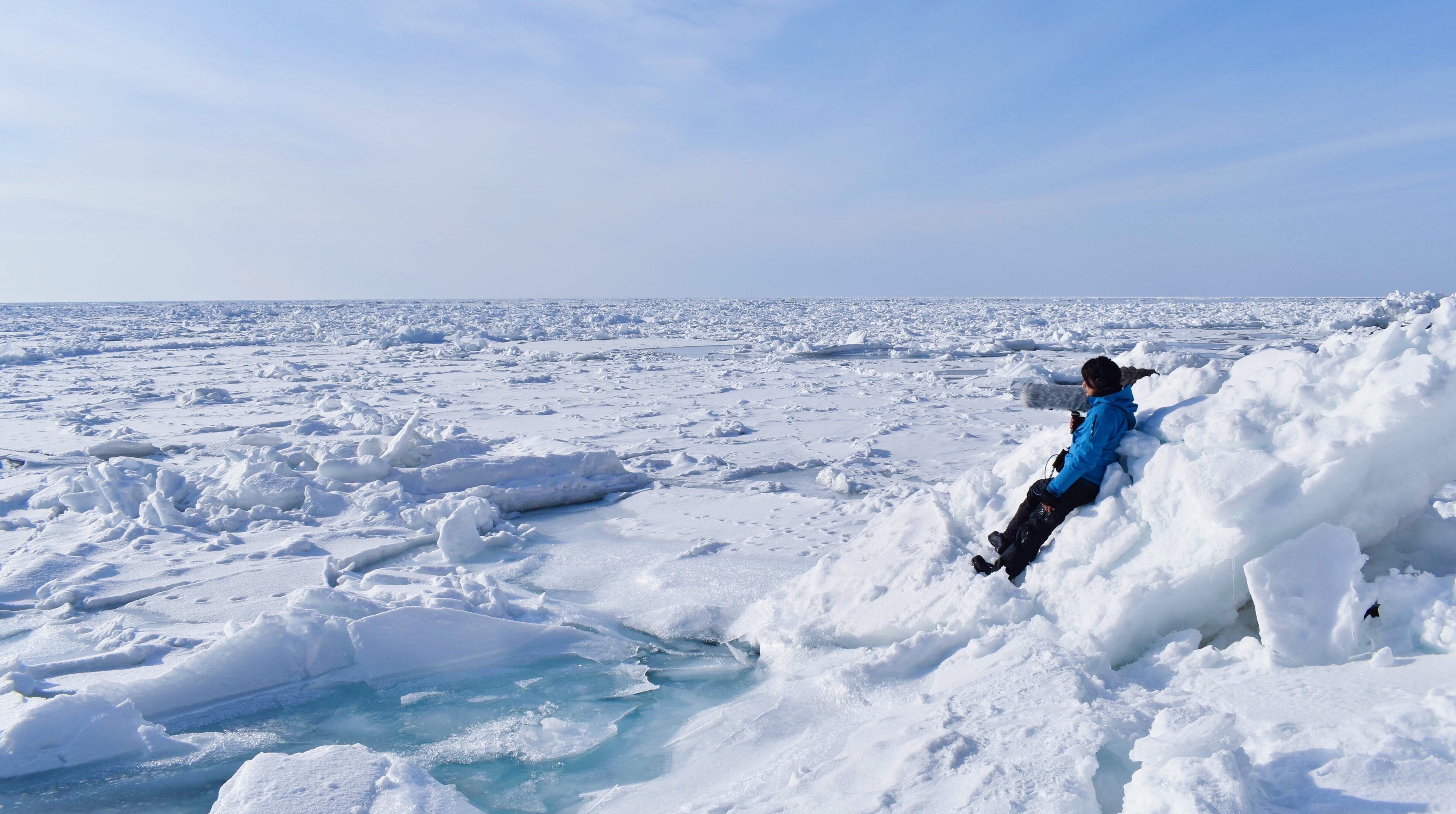